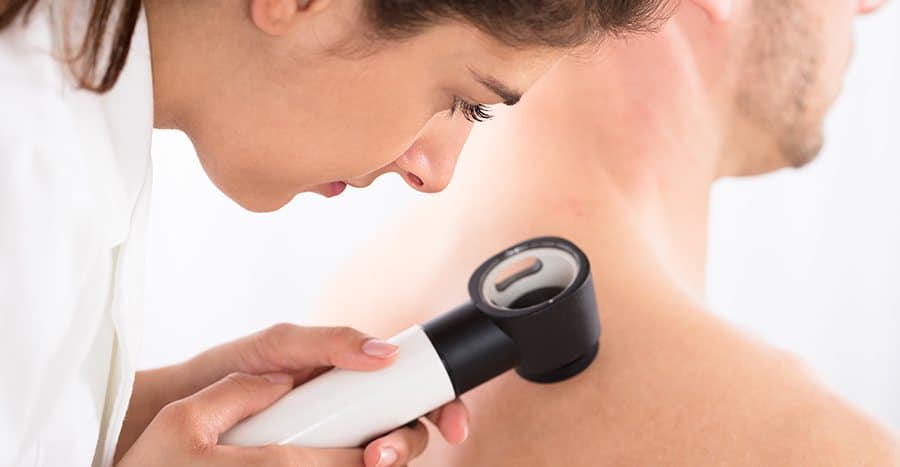 Skin Cancer is the most common type of cancer that humans get.  Unfortunately, sun isn’t the only factor in developing skin cancer.  Family history, exposure to x-rays, weakened immune system, sunburns, scarring caused by a disease or burn, exposure to cancer causing compounds and indoor tanning beds and sunlamps also increase a person’s risk.  The following are different types of skin cancer;

Squamous Cell Carcinoma – The second most common form of skin cancer.  This type usually looks like a firm bump, scaly patch, or an ulcer that heals and then re-opens.  Usually red in color and tends to form on skin that gets regular sun exposure, such as the face, neck, rim of ear, arms and torso.  Squamous cell carcinoma has the potential to grow deep, so early treatment can prevent damage and disfigurement and from spreading to other parts of the body.

Melanoma – This type of skin cancer often times develops in or around a mole or suddenly appears as a new dark spot on the skin.  Melanoma is the deadliest form of skin cancer and according to the American Academy of Dermatology, more than 8,500 Americans (nearly one person per hour) die from melanoma. Other signs that could indicate melanoma are itching, pain, or bleeding in a mole or new spot on the skin.

Get to know your skin and moles!  A change in the look and size of a mole is often the first sign of melanoma; because of this, it is important to perform regular skin self-exams in order to recognize suspicious mole activity.  Be on the lookout for suspicious moles with the ABCDE’s of melanoma detection.

A is for ASYMMETRY: One half is unlike the other.

B is for BORDER: Irregular scalloped or poorly defined border.

C is for COLOR: Varied from one area to another; shades of tan and brown, black; sometimes white, red or blue.

D is for DIAMETER: While melanomas are usually larger than a pencil eraser in size, they can be smaller.

E is for EVOLVING: Moles that appear to be different from the rest or is changing in shape, color or size.

Having an atypical mole may not mean that it is cancerous.   If your moles are changing, have more than 50 –100 or more moles, or have a parent, sibling or child that has had melanoma, your risk is greatly increased.

With early detection and proper treatment, the cure rate for basal cell carcinoma and Squamous cell carcinoma is about 95% according to the American Academy of Dermatologists. Regular skin exams performed by a board certified dermatologist can help to detect skin cancer before it spreads which means a longer and healthier life for you.

Mohs surgery involves the systematic removal and microscopic analysis of thin layers of tissue at the tumor site until the last traces of the cancer have been eliminated.
Dermatology encompasses a wide spectrum of skin-related conditions, concerns, diseases and the treatments used to alleviate those conditions.
Whether you are interested in achieving a more youthful and radiant appearance, or you are interested in eliminating stubborn fat through body contouring, we offer treatments that can help you achieve the optimal results you desire.
In the relaxing environment of the spa at the Dermatology Center of the Rockies, we offer our patients a collection of effective and preventative skincare therapies designed to have each guest looking and feeling their best.
Request Appointment 303-532-2810
Email Us Questions? Ask our office.

How May We Help?

© 2022 Dermatology Center of the Rockies. All Rights Reserved. Development & Marketing by Advice Media.